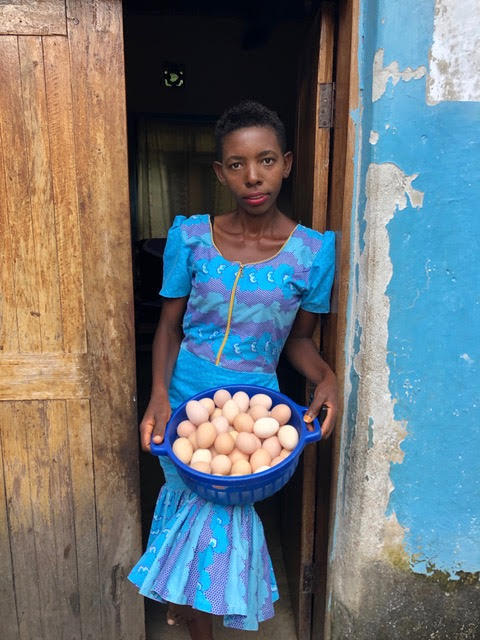 A Village and Wildlife Conservation Story in the Age of Coronavirus

I was first greeted by Happy Sanga at a village meeting in Makifu, Tanzania in March 2019. She was a petite woman with large intelligent eyes that expressed an eagerness to make something of herself, for her family and her village. Today she stands in her doorway holding a basket of eggs, eyes brightened by a wide smile, and surrounded by over fifty chickens. Happy illustrates a tale of how wildlife conservation may become successful through the economic prosperity of the villagers.

Muddy Ruaha River in Central Tanzania hugs sleepy Makifu village as it meanders into the northern ridgeline of Ruaha National Park. A horseshoe shaped dirt road stretches for five miles, speckled with makeshift mud, block, or wood houses. Tall grasses border rice fields behind them, and streams of water flow down from the hills and through the village, towards the river. There are 3 leopards who call the hillside home; the odd family of giraffe may be found wandering along the riverbank—and on my last visit, I was cautioned against walking between the main road and the Hodi Hodi Safari Camp as I would likely come across a male and female lion who were quickly earning a reputation for harassing passing motorcyclists.

For years, we have heard despairing comments from Park Rangers, Safari Operators and Conservationists, that all their efforts to protect the wildlife are challenged by rampant poaching and the poverty that inclines the local natives to turn a blind eye. Subsistence hunting persists. How does one tell a villager that they cannot kill a wild animal when they need to feed their family?

Our approach: a business solution to conservation. Not your ordinary initiative to address wildlife conservation through economic development.

Over the years, we have seen countless noble endeavors to improve the livelihoods of people throughout the developing world. International donor organizations, non-governmental organizations, church groups, government programs and others provided training, supplied equipment, and built capacities with limited sustainable results. The beneficiaries seldom had to invest anything other than their labor, and thus lacked ownership and responsibility. Our process: to bring a market opportunity and provide mentorship. In this instance, the farmers themselves would have to invest in their education, materials and all the inputs necessary to create a product for the marketplace.

We identified the Ruaha National Park as our location to prove the concept. Makifu lands establish the Wildlife Management Area (WMA) bordering the Park. This connection binds the villagers, the park, and the safari camps together in conservation and wildlife protection.

An initial meeting with safari camps and lodges in the WMA and Park quickly led to the identification of supply chain challenges in the delivery of foods for the lodges. Unbelievably, much of the foods to feed the tourists are flown-in from Dar es Salaam which is almost as far as the length of Italy or by truck for a 6 to 8 hour go-and-return drive to the city of Iringa on a road that is only such in name. The list of items that could be supplied from a neighboring village was ultimately quite long, but what could the local villages produce that would also offer them opportunities outside of direct lodge supply? We settled on poultry and to be more precise, initially eggs.

Why eggs? Eggs are first and foremost an excellent form of improved nutrition that would be welcome within the local community. Raising chickens is an easily adaptable process to include in an already farming community; there would be local demand for eggs; and they may be produced year-round. Also, eggs are not zucchini. If everyone decides to grow zucchini, there’s one season; there’s evidently going to be an over-supply; there is no ability to store and/or process; and the people will quickly lose their appetite to eat an over-abundance of this green delicacy. Eggs are tradeable and may be used to produce any number of tasty dishes or baked goods.

Our meeting with the village chairman of Makifu, an elegant Masai woman, immediately led to a call for a community meeting whereby we presented our proposal to the villagers to produce eggs that the Safari Camps all agreed to purchase. However, we did not offer to fund the initiative.

The villagers all looked at each other in confusion. Who were these “muzungu” (Swahili for white people who endlessly roam around) who came to tell them that they had an opportunity but weren’t bringing any money? We explained that we would provide mentorship but that they had to own the business and the responsibility. The initial 234 participants quickly dropped to 50 and then ultimately to 20. From this 20, the business was to be built. Over the next year, they would pay for their “poultry school,” development of a business plan and business trainings. They would also invest in the materials to construct their own hen houses and purchase their own chickens and feeds.

Nine months into the new egg business, they delivered their first tray of 30 eggs to a local lodge, followed by more eggs and to more lodges. Eggs and chickens for meat began to show up in the local market and the economy began to grow. The results were astounding and sent a clear message of success to the community. The knock-on effect from a few villagers selling eggs to lodges was quite surprising and unexpected; however, welcomed.

As I arrived at Happy Sanga’s home in March 2020 for a visit on the anniversary of our meeting, she greeted me with a smile and introduced me to her 50 chickens (100 more to arrive soon). Her daughter informed me that she and her siblings were now eating 2 eggs a week, when in the past they were lucky to eat 4 within a year.

Unfortunately, my arrival was not just to say hello. I had also arrived to plan. Makifu had faced severe flooding, the rice crop had predominately been destroyed, bridges washed-out and the village cut off from any roads leading back to larger towns. Additionally, the coronavirus was sweeping through Europe and the impact was expected to cancel the entire safari season. That would mean no tourists and thus no egg sales to the safari camps.

The deluge of heavy rains persisted as we met under the eave of the village community center, competing for dry space with the tsetse flies. We were joined by Happy, the producer group secretary Atuleyte Msigwa; Aberney Mkuye the market coordinator; and the village business leader Hawad Kalinga. They all encouraged me to walk through the village to see how the community had changed. Village kiosks had sprung-up offering fried potatoes with eggs, chicken soup, and grilled chicken.

These were newly established businesses in addition to a local demand for eggs that far surpassed the current supply. I was told that for the first time, the loss of the primary cash crop from the flooding didn’t wipe the farmers out and create food insecurity. Because of the chickens, they had the money to replant and to purchase food.

All was not lost.

What had started out as a dual-purpose initiative, to create economic opportunity in a village bordering a national park in an effort to secure the conservation effort, had led to a much greater impact. Coronavirus may shut down all the tourist safaris, but there continues to be local economic growth; improved nutrition and ultimately improved protection for the wildlife.